Home | News | The “Silk Road” Is Not Only Our Cultural Heritage but Also One...
•
School of Law, Conferences, Center for International Law

The "Walking the Silk Road" international conference hosted by the Mathias Corvinus Collegium and co-organized by the European Chinese Arbitration Association and the Hungarian Arbitration Association has been a major success. Twenty speakers from nine different countries shared their insights on the future of EU-China economic and legal relations. The keynote address of the conference was delivered by the world-renown Professor of International Law, Muthucumaraswamy Sornarajah from the National University of Singapore.

In his opening remarks, Péter Lánczi, the Deputy Director General of the MCC, emphasized that one of the major goals of the MCC is to encourage young Hungarian talents to search for answers and solutions to the world’s big questions, developments and challenges. The New Silk Road, today’s virtual highway, is one such development that potentially offers multiple advantages and opportunities. In his remarks, Lénárd Sándor, Head of the Center for International Law at MCC, pointed out that the Silk Road is part of our civilizational heritage in East-West relations and that it also sowed the seeds of globalization. It is important to be prepared to be prepared if we want to reap the benefits of this unique and historical project and overcome the existing difficulties and challenges.

In his address, Ádám Stifter, Deputy State Secretary of the Hungarian Ministry of Foreign Affairs and Trade, emphasized the close and fruitful relationship between Hungary and the People’s Republic of China which is based on mutual respect. He pointed out that Hungary recognized early on the importance of the rising economy of the People’s Republic of China. Hungary launched the “Eastern Opening” policy in 2012, and it was among the first countries to join the Belt and Road Initiative (BRI). The First Secretary of the Embassy of the People’s Republic of China in Hungary, the Honorable Zhou Yi, highlighted the BRI’s significance for the international community as it brings investment, digitalization and green transition. He also emphasized the large of amount of investments that Chinese companies have been making in Hungary as well as in the region.

The first panel discussion of the international conference explored the relationship between arbitration agreements and insolvency proceedings in the context of the BRI. Following the introductory remarks of Prof. Reinhard Bork, the first panel explored from a cross-border perspective the complex legal questions arising at the intersection of insolvency and arbitration. The members of the panel included Prof. István Varga, Thierry Lauriol, Katharina Kitzberger, Zoltán Fabók and Lei Niu, and the panel was moderated by Prof. Reinhard Bork. The panel remarked that the effects of the opening of insolvency proceedings on ongoing or planned arbitration proceedings are quite divers across jurisdictions. In some jurisdictions, only state courts can hear lawsuits involving an insolvent debtor. In others, the permission of the court or a creditors’ committee is necessary for arbitration proceedings to proceed. Still others impose a stay on ongoing arbitration proceedings if one of the parties enters insolvency. The panel discussion also revealed that different jurisdictions have adopted different solutions to deal with the situation where the insolvency estate lacks the necessary means to pay the advances and deposits towards the costs of the arbitration proceedings and the fees of the arbitrators. It was observed that the attitude of insolvency administrators towards arbitration is generally skeptical, albeit less so in cross-border situations. Against this background, the role of mediation should not be underestimated.

The keynote address of the conference was delivered by the world-renown professor of international law, Professor Muthucumaraswamy Sornarajah of the National University of Singapore, and focused on the opportunities and challenges of China’s New Silk Road Initiative. Professor Sornarajah pointed out that in regard to economic relations, China’s BRI has resulted in the development of a sophisticated domestic legal system of law – including corporate, security and transaction law – that is equal to that of the Western world and has given rise to an “economic rule of law”. The professor emphasized that it is a legitimate aspiration of China to restore its historic place as a great trading nation, and the BRI is an important step in this direction. Regarding investment relations, China has concluded more balanced investment treaties that provide carve-outs for public interest regulation and is willing to settle investment disputes rather than resorting to investment arbitration. At the same time, Professor Sornarajah also pointed out some of the risks of the New Silk Road, such as the presence of state-owned enterprises, the consequent issues of national security and the problem of sovereign immunity at the stage of enforcement.

The second panel explored in further detail the legal framework and the economic reality of the BRI and of EU-China trade and investment relations more generally. The panelists included Mariann Gecse, Zoltán Lédig, Gergely Szabó, Csaba Moldicz and David Morris, and the panel was moderated by Prof. Veronika Korom. The panel kicked off with an overview of the historic, economic, political and cultural background to modern-day China and its BRI strategy, before turning to the recently concluded EU-China Comprehensive Agreement on Investment which aims to ensure that EU investors have a better access to the Chinese market and may compete on a more level playing with their Chinese competitors. The panel also discussed the facts and figures of Chinese investments in the EU under the BRI and presented the flagship BRI investment projects in Hungary. The panel further touched upon the challenges for Chinese investors resulting from the EU FDI screening mechanism as well as on the opportunities in Hungary resulting in particular from Hungary’s strategic geographical location, its stability and its favorable Eastern Opening policy.

In his address, Cui Yang, Assistant Secretary General at the European Arbitration Center of the China International Economic and Trade Arbitration Commission (CIETAC) in Vienna, emphasized the importance of effective dispute resolution for the BRI. He recalled that CIETAC was established in 1956 and has since gained a reputation at home and abroad as an independent, impartial and efficient arbitration institution. In 2018, CIETAC opened its European Arbitration Center in Vienna to offer dispute resolution services in particular for BRI-related disputes arising in the Central Eastern European region.

The last panel discussion explored international dispute resolution with Chinese parties under the BRI. The panelists included Marianne Kecsmár, János Burai-Kovács, Robin Oldenstam and Alice Meissner, and the panel was moderated by Judge Avi Zamir. The panel addressed the typical dispute resolution strategies of Chinese parties and the challenges in representing Chinese clients in disputes in front of European courts and arbitral tribunals. The panel further presented the various initiatives implemented by the Arbitration Institute of the Stockholm Chamber of Commerce, the ICC International Court of Arbitration and the Permanent Arbitration Court of the Hungarian Chamber of Commerce and Industry to attract more BRI-related disputes and to provide an attractive venue for the resolution of international disputes involving Chinese parties.

The Mathias Corvinus Collegium is proud to have hosted this instructive and rich conference that brought together world-renown academics, practitioners and experts from around the world, and that Budapest has served as the venue for this unique and timely international event. 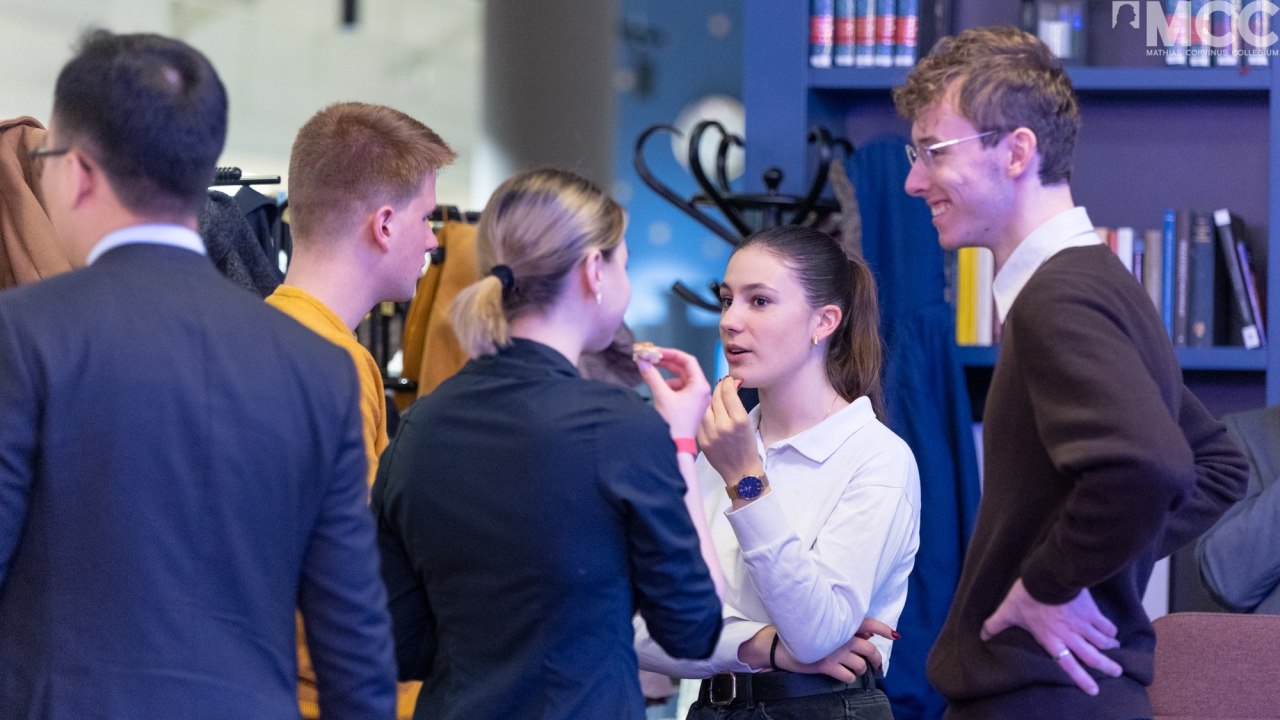 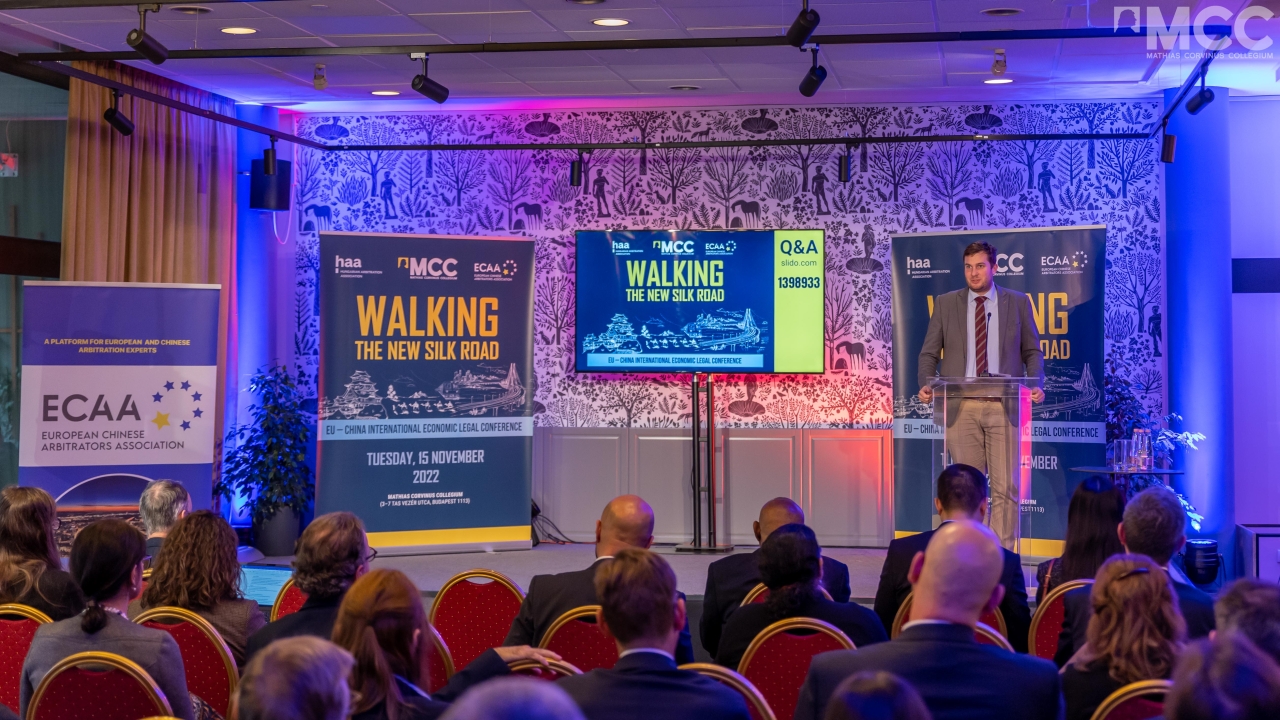 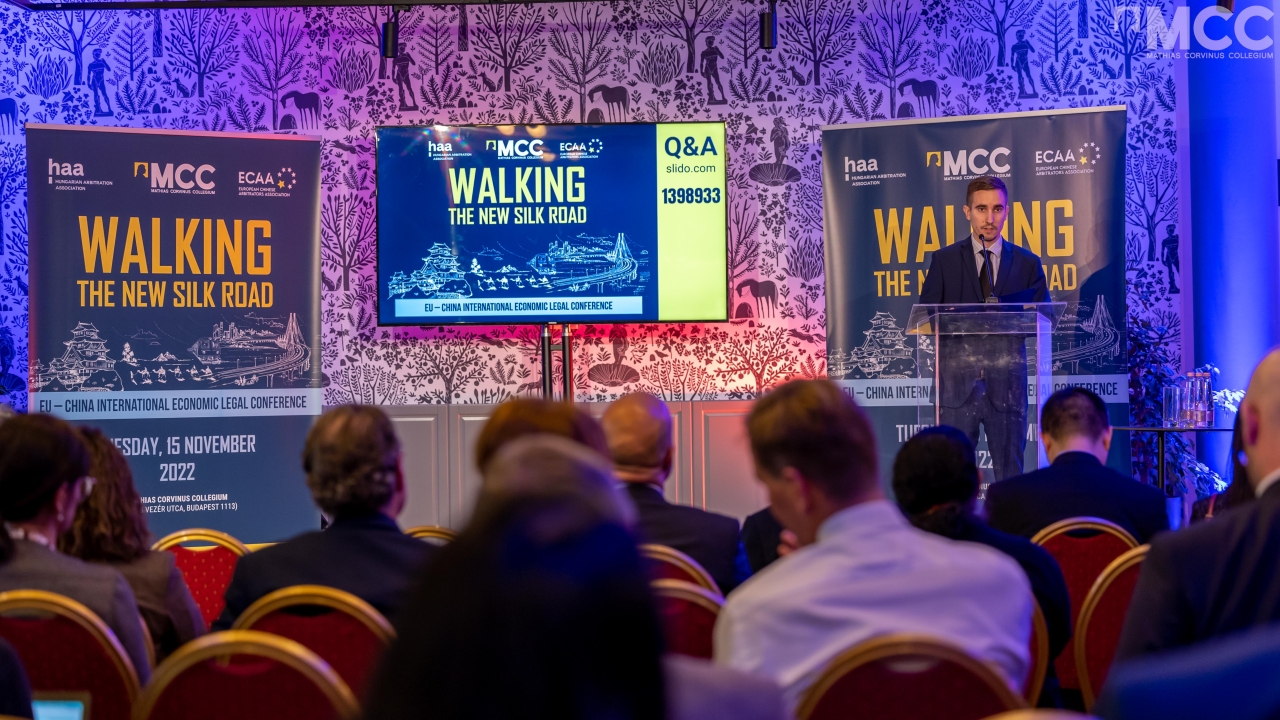 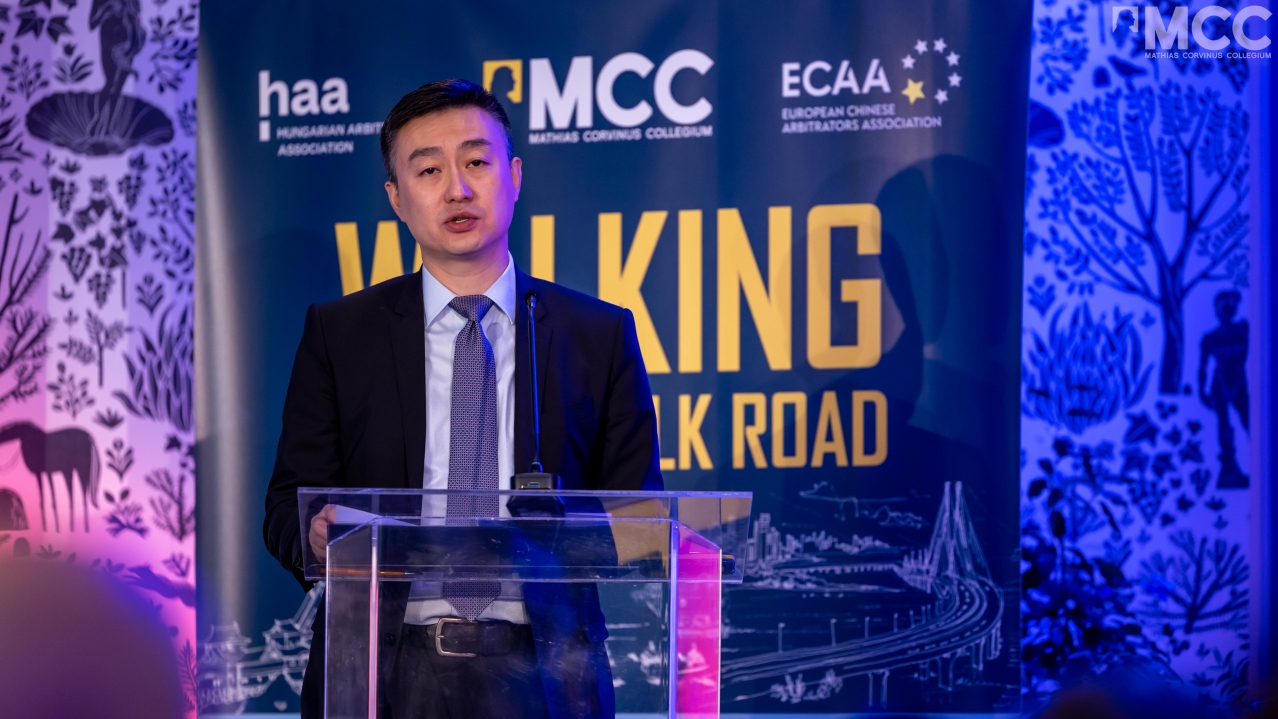 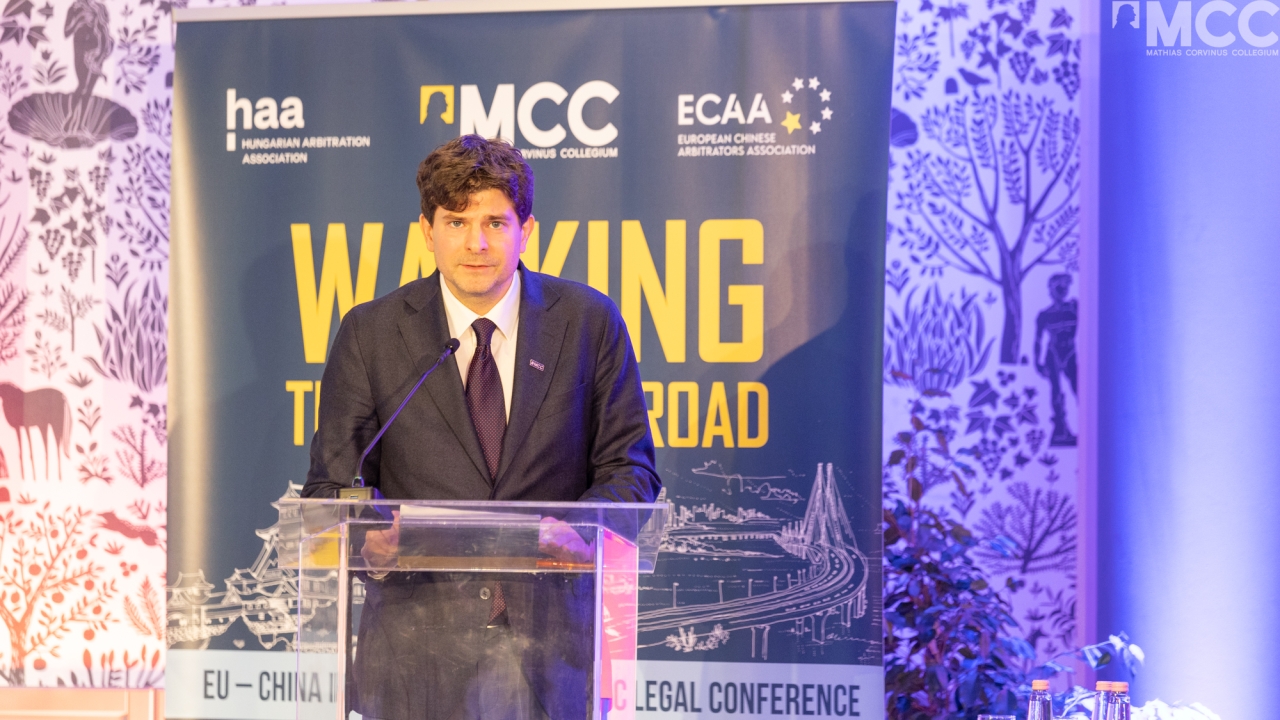 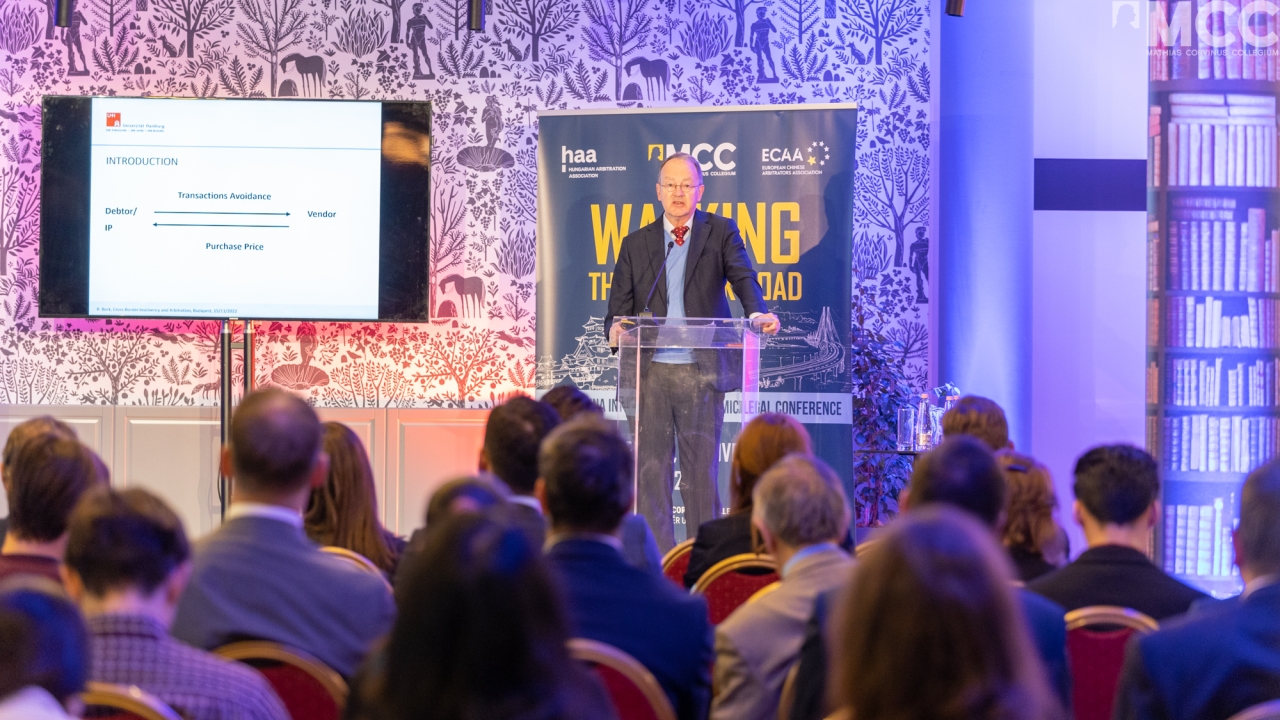 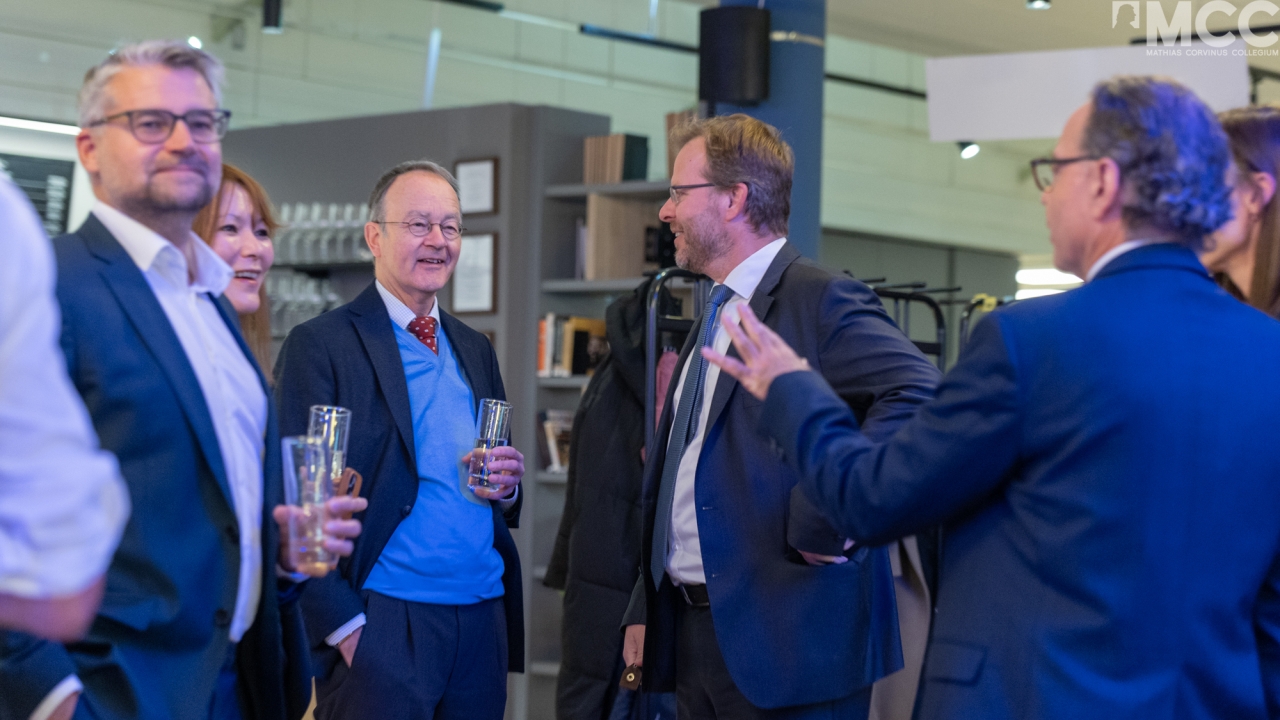 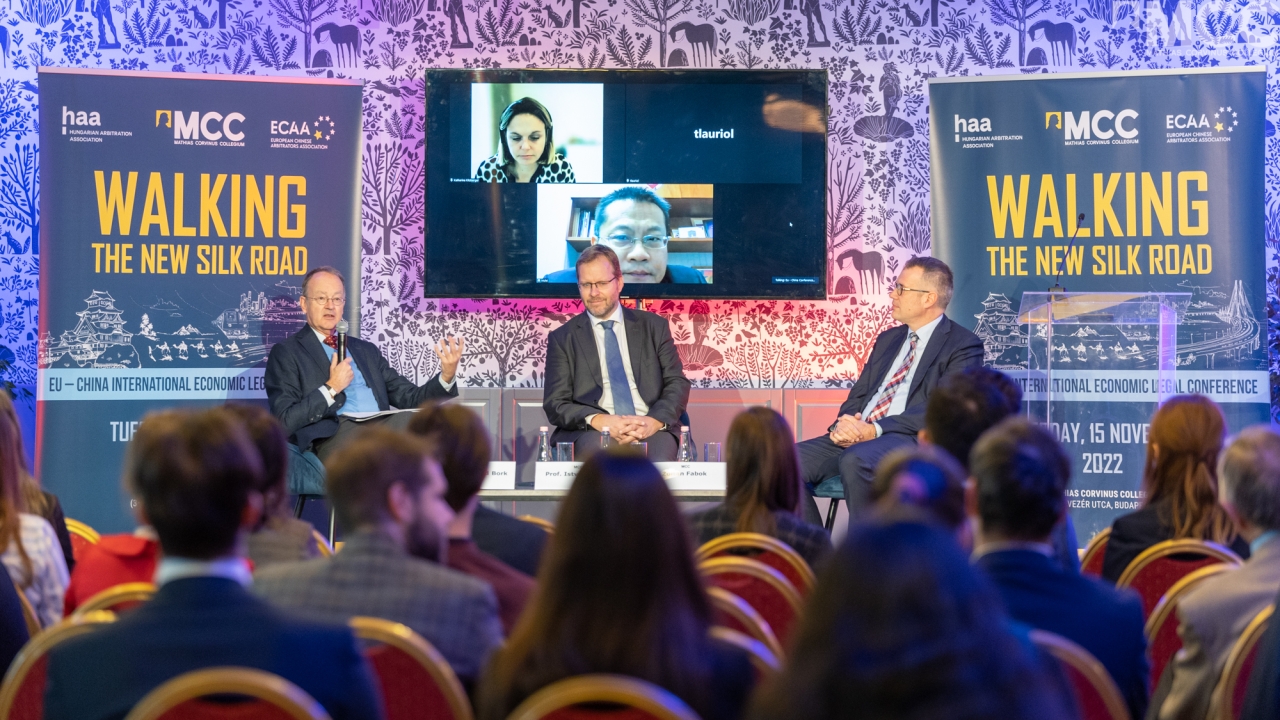 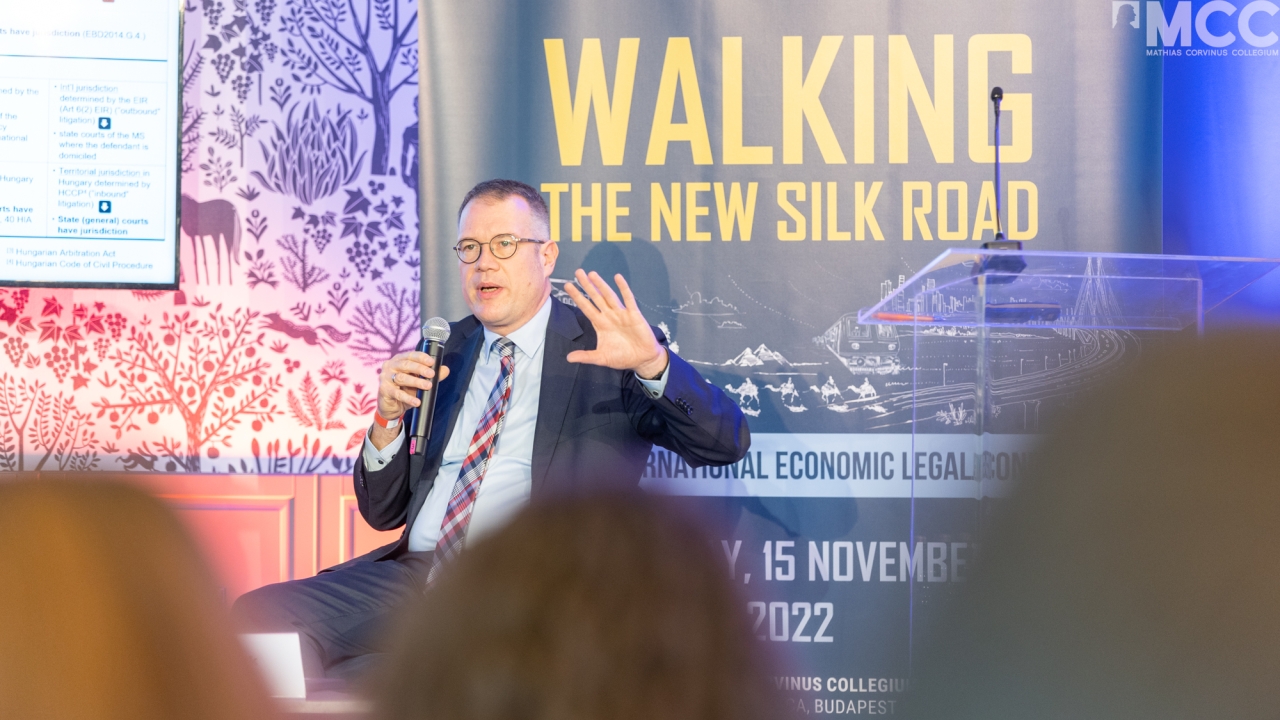 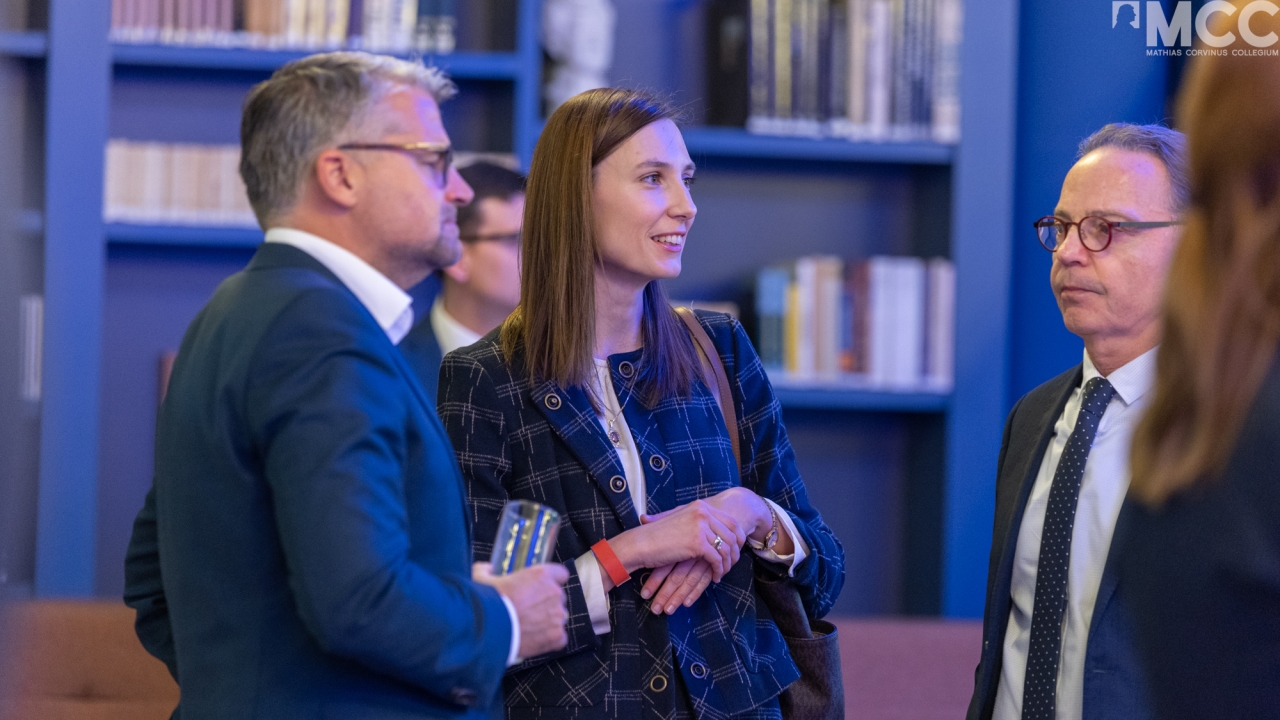 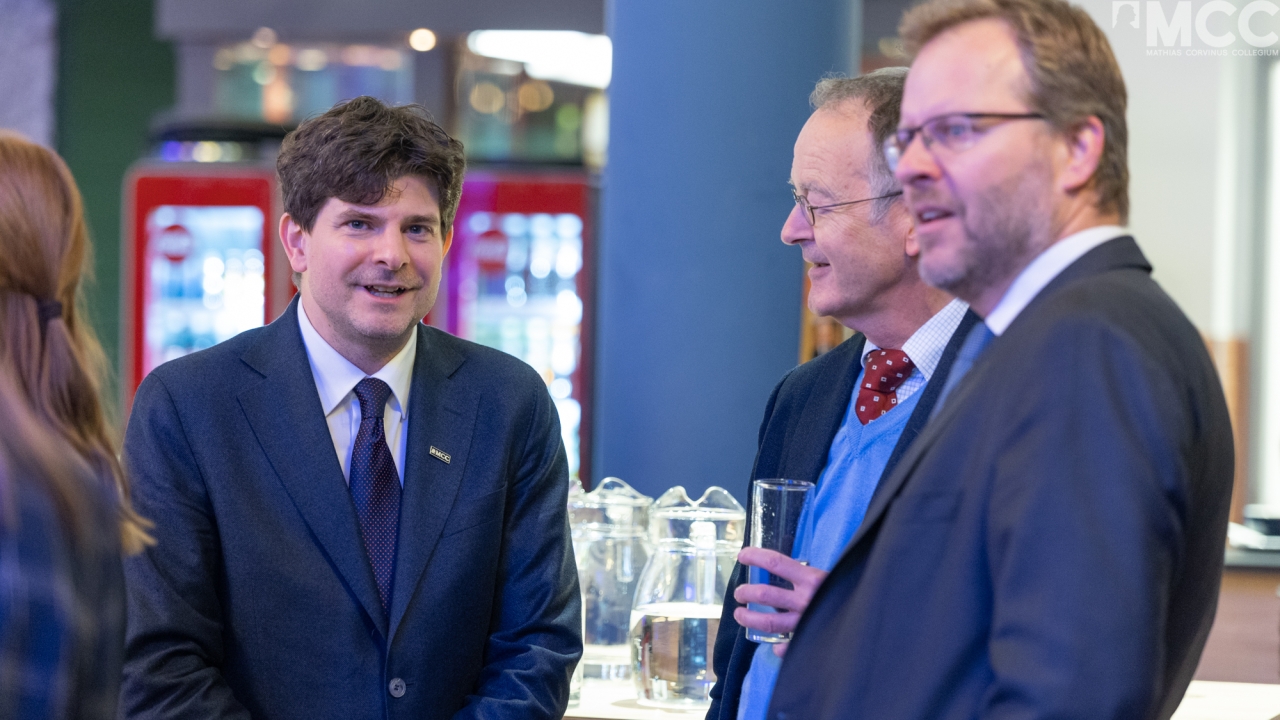 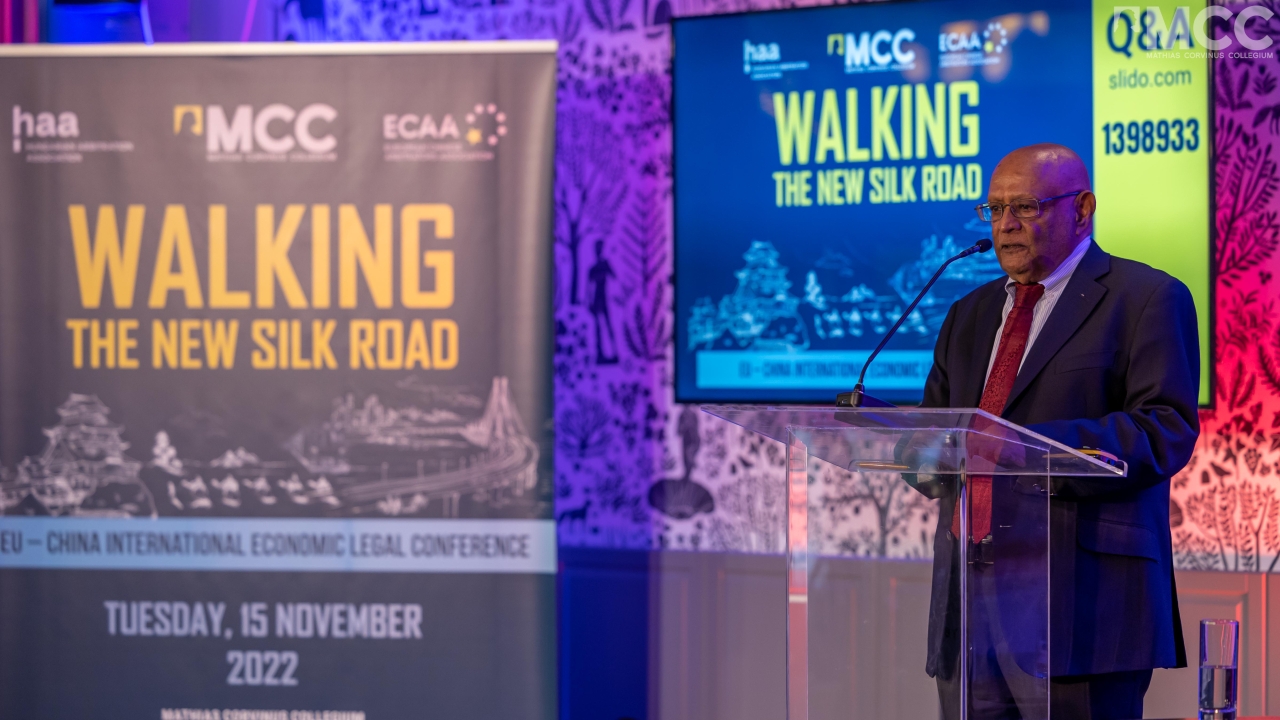 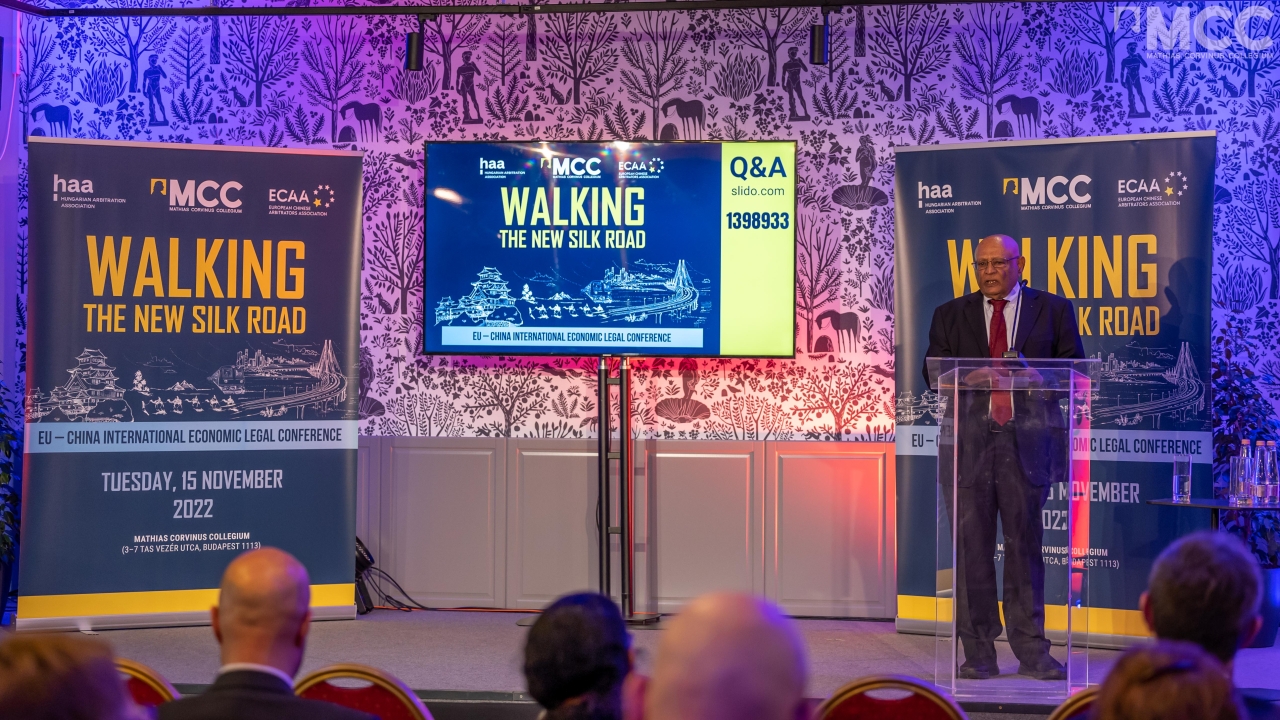 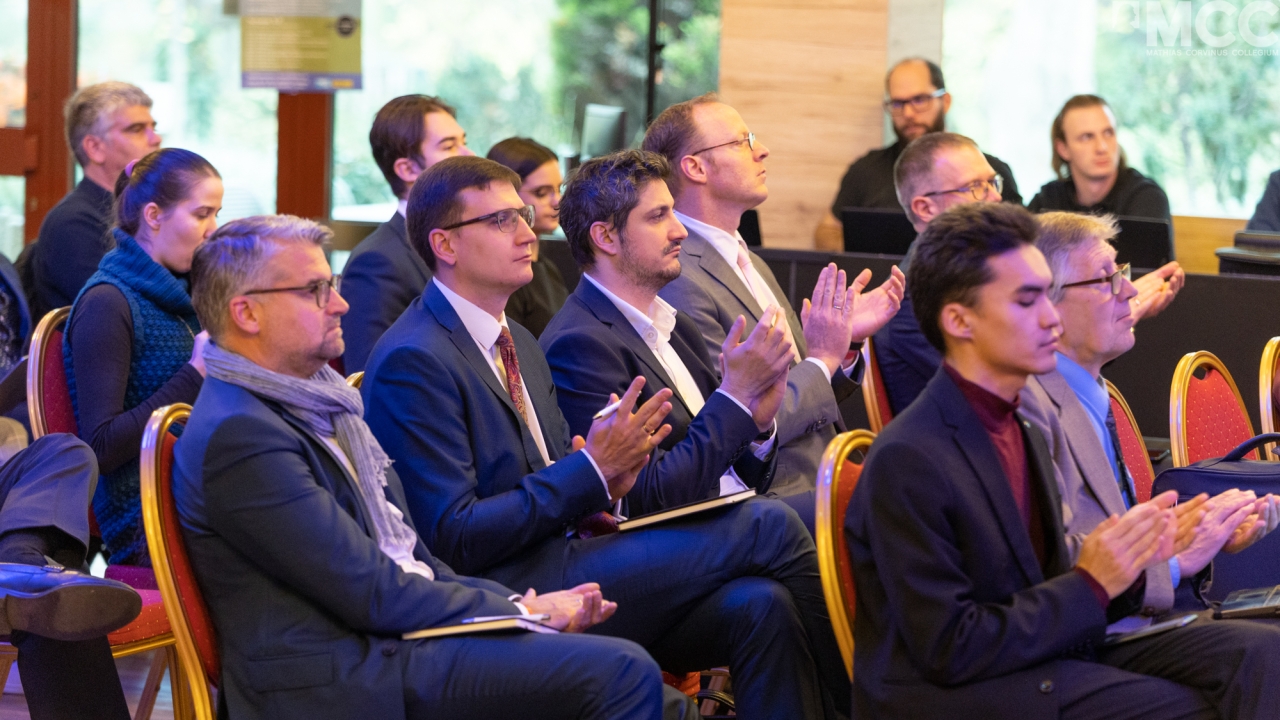 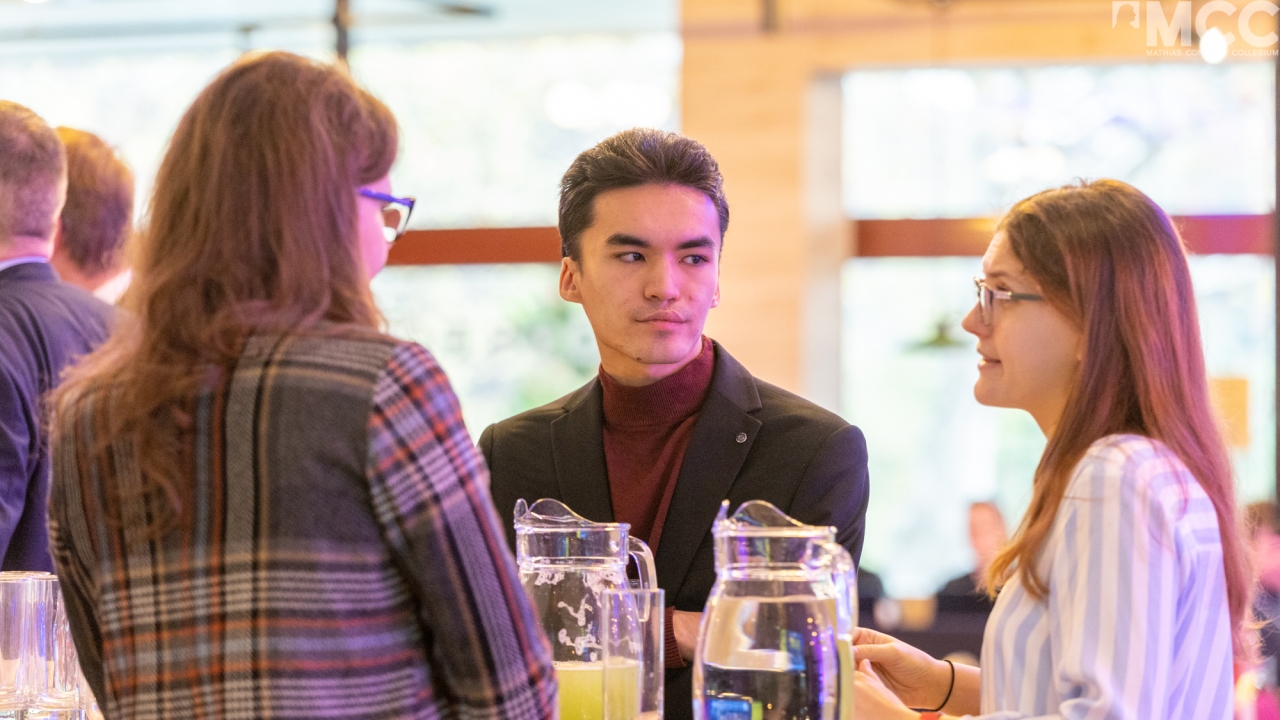 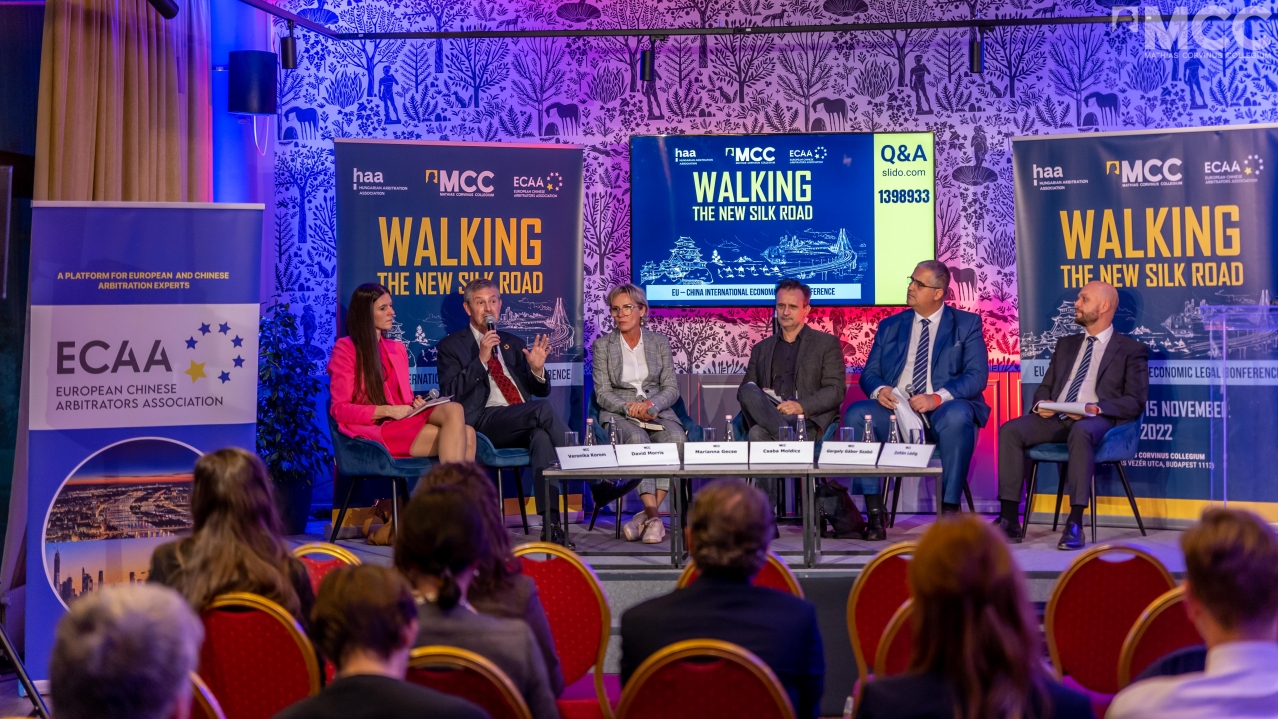 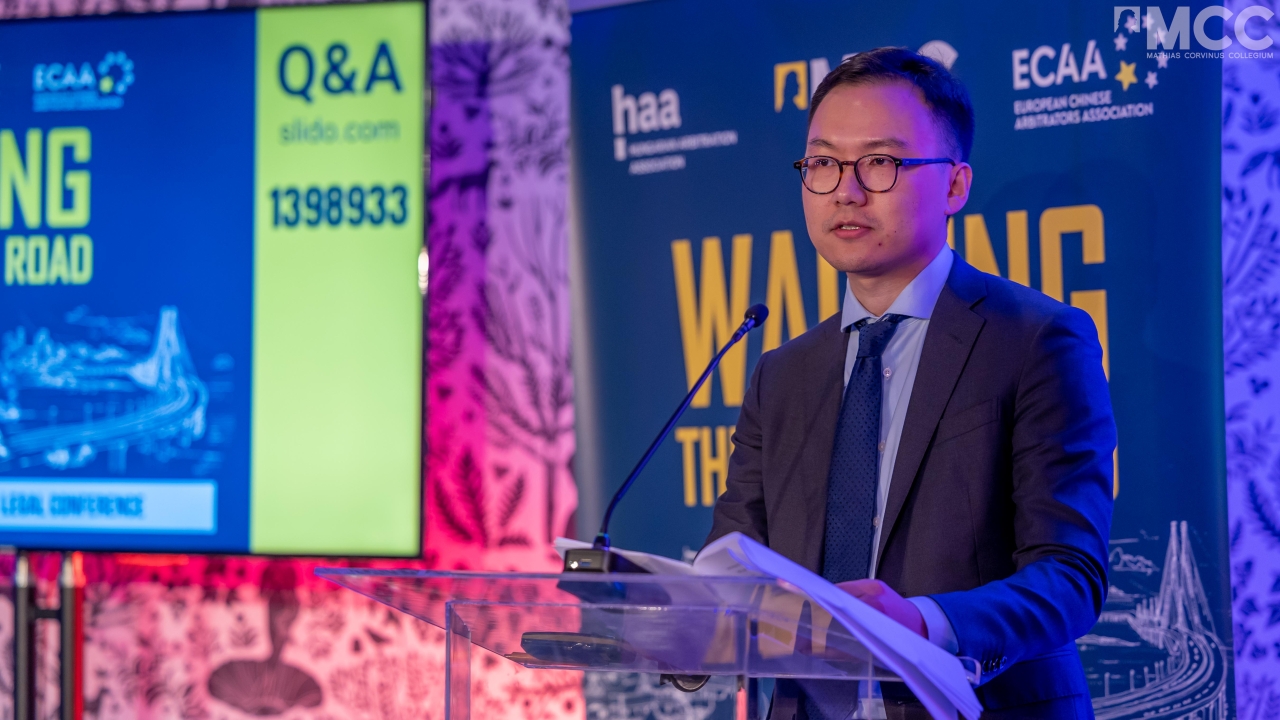 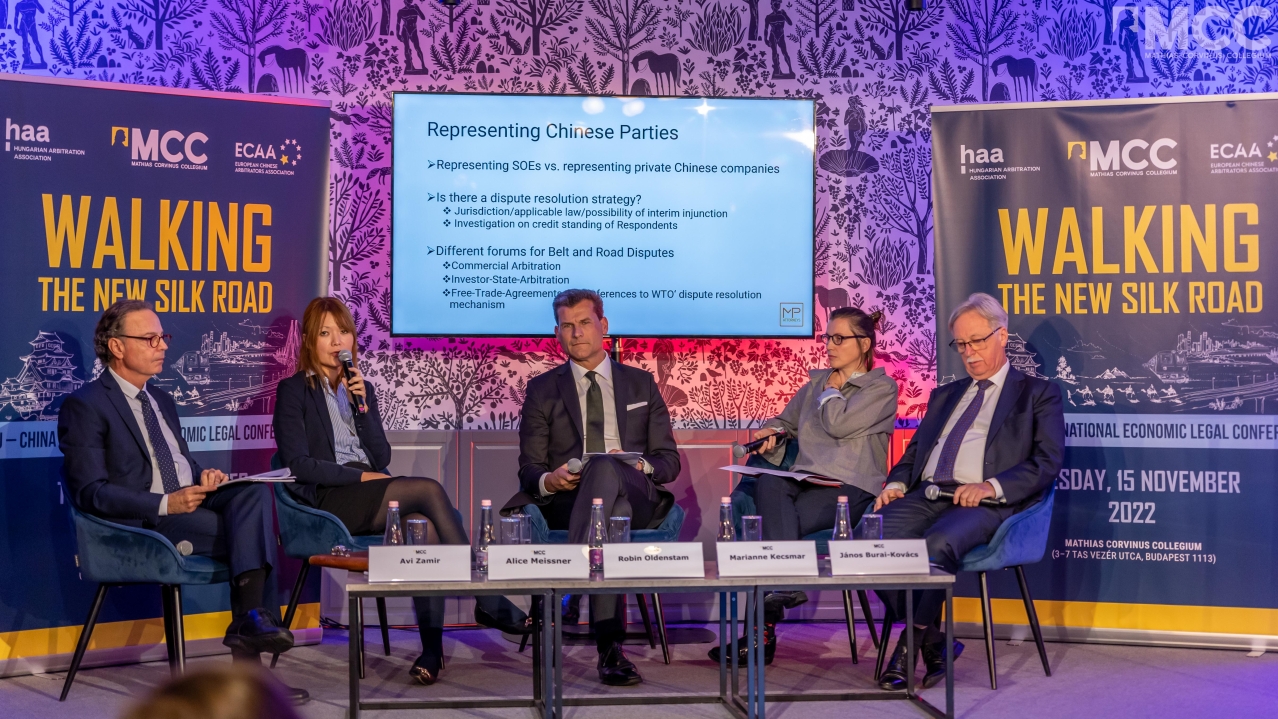 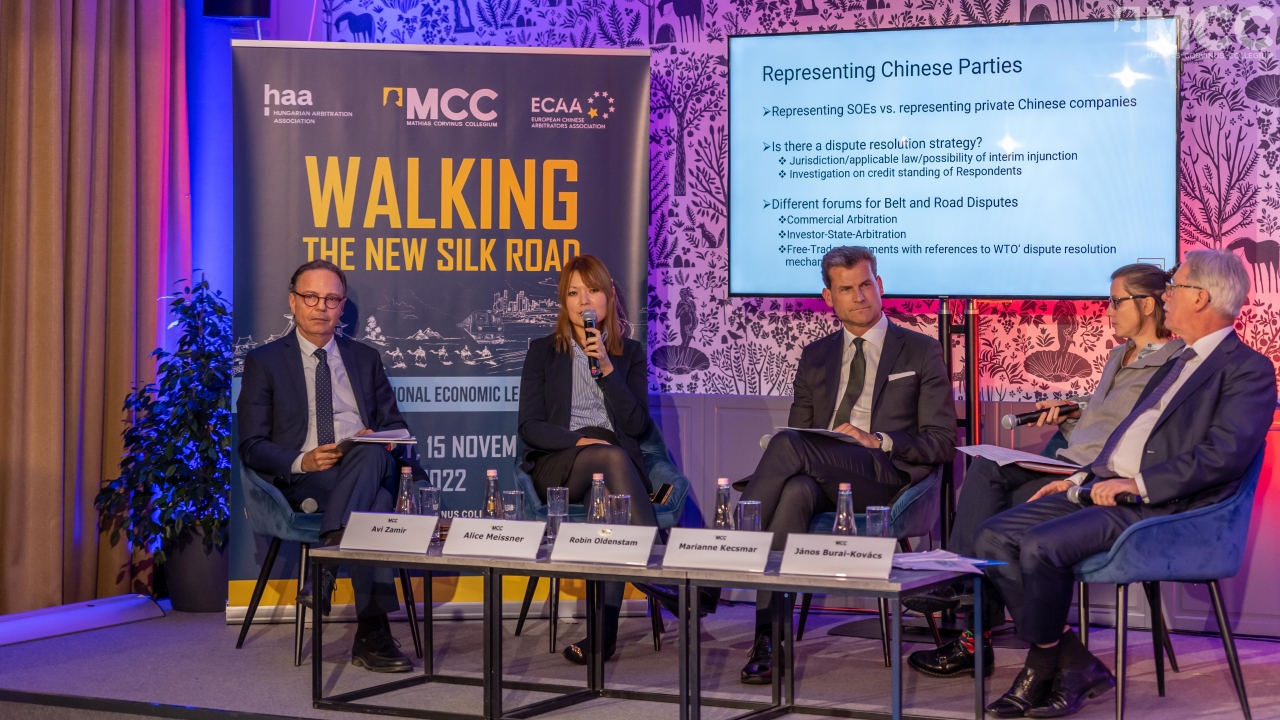 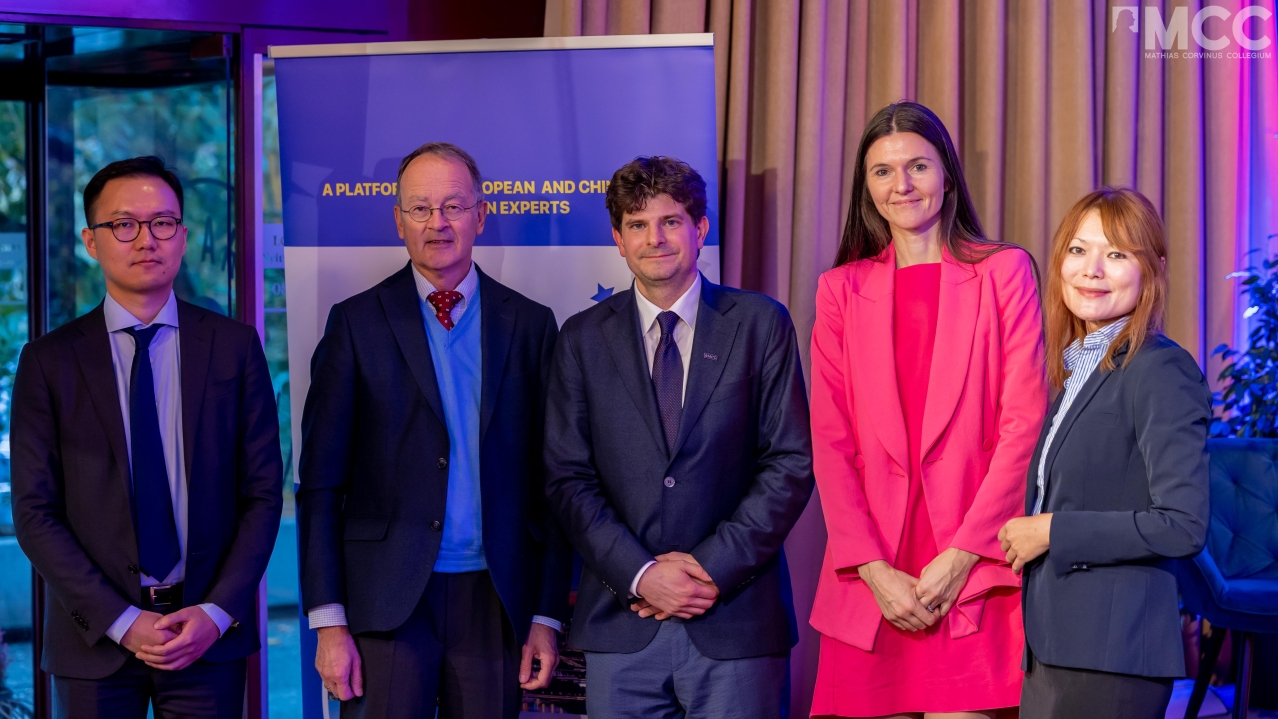